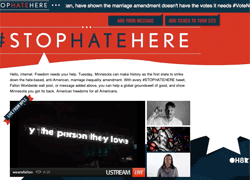 Make Fallon a beacon to Minnesota, sending a message of anti-hate pro-same-sex marriage.  Minnesota had a vote on the ballet to make same sex marriage constitutionally illegal.  Fallon wanted to send messages of support to voters of Minnesota

I led a team that in less then a week located a partner to drive a 5 foot by 60 foot LED sign up from Kansas and help us covertly set it up in our office to broadcast the messages from the 23rd floor and light up the Minneapolis night sky. We found partners that would help us curate messages from Twitter and Facebook and rebroadcasted these messages in a sharable ticker and also recruited local supporters to add our ticker to their homepages.

The Fallon LED beacon was live-broadcasted on fallon.com.  Anywhere someone saw the ticker they could add their own message that would appear on the large LED sign.

This site uses Akismet to reduce spam. Learn how your comment data is processed.